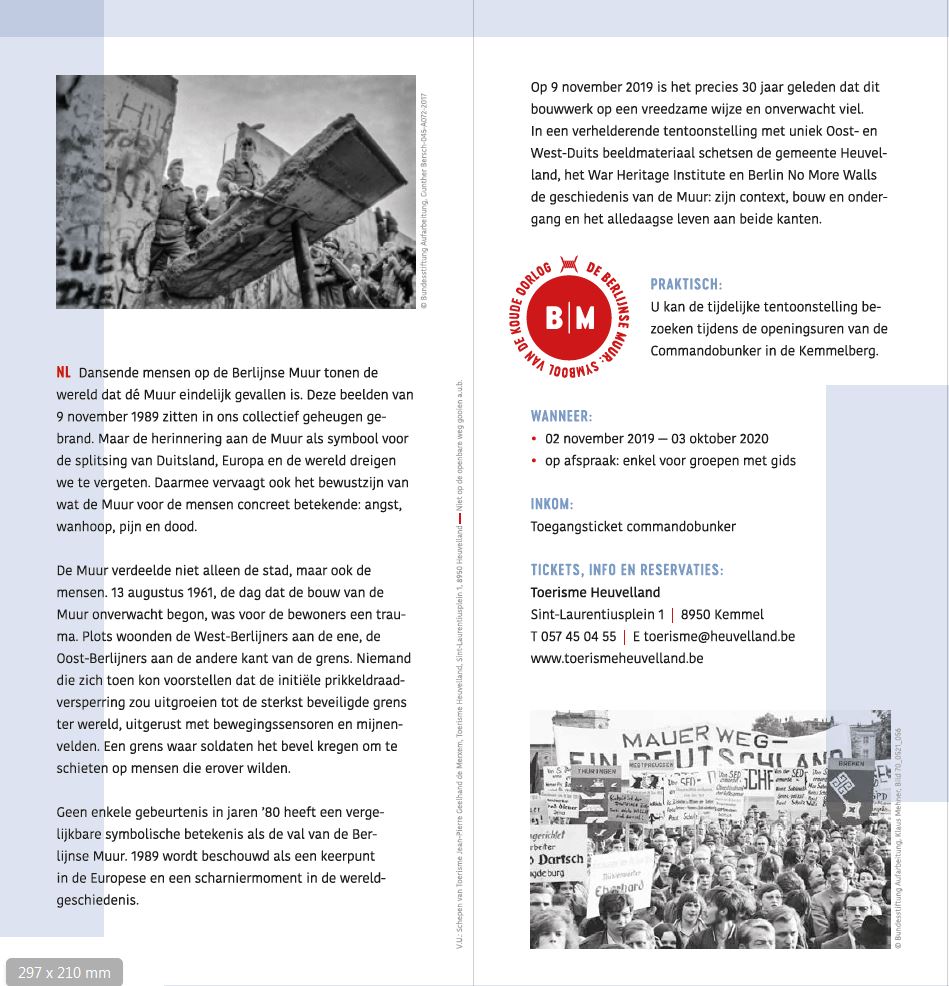 23May49: Foundation of the Federal Republic of Germany (FRG).

25Mar54: Statement of the Soviet government about the acknowledgement of sovereignty of the GDR.

01Oct59: Law about the new flag for the GDR with hammer, reaping-hook, ear of corn and the colors black, red and yellow.

13Aug61: The construction of the wall around West Berlin and the barricade on the frontier with West Germany stops the GDR citizens from escaping. This antifascist wall and the infiltration of Western agents justify this action, hence Ulbricht.

02Jan64: Distribution of the new “Citizen of the German Democratic Republic” identification cards.

01Aug64: Distribution of new banknotes. In December of 1967, the GDR Mark is implemented.

26Sep64: Three States Theory: an agreement between the GDR and the Soviet Union presumes 3 states in Germany: the Federal Republic, West Berlin and the GDR.

25Nov64: Obligatory exchange from West Marks to East Marks for travelers from the Federal Republic, West Berlin and other Western countries.

19Sep69: First negotiations between the Ministers of Traffic from the FRG and GDR.

28Oct69: Government statement of Willy Brandt. He makes clear to be prepared for negotiations with the GDR on basis of the concept: “Two states, one nation.”

25Apr74: Günther Guillaume, personal staff member of Willy Brandt, is being arrested under suspicion of espionage. Willy Brandt resigns on the 6th of May.

02May74: Opening of agencies in Bonn and East Berlin.

26Oct74: The minimum amount for exchange in GDR Marks is being lowered. 13 Marks for GDR visitors and 6.5 Marks for East Berlin.

08Oct79: Announcement of the withdrawal of 20,000 Soviet soldiers and 1,000 armoured cars from the GDR by party leader Bresjnev during a visit to the GDR.

13Feb84: Helmut Kohl and Erich Honecker meet each other in Moscow regarding the funeral of Andropow.

06Apr84: Occupation of the embassy in Prague. The 35 GDR citizens can return to the GDR, with the promise that they can soon leave the GDR.

02May89: Hungarian frontier soldiers start tearing down the barricades on the frontier with Austria.

24Aug89: The GDR citizens, who escaped to the West German embassy in Prague, can leave the Eastern bloc. Every day, more than 100 GDR refugees cross the Hungarian – Austrian frontier, illegally entering the west. Hungarian functionaries turn a blind eye.

31Sep89: In Prague, Minister of Foreign Affairs Genscher informs that the 4,000 refugees can travel from the GDR to the Federal Republic with special trains. The same goes for the refugees in Warschau.

07Oct89: For the occasion of the 40th anniversary of the GDR, party leader Mikhail Gorbachev visits East Berlin and points out the importance of reformations. Demonstrations are violently broken up.

27Oct89: Krenz announces amnesty for the refugees and asks them to return.

03Nov89: The GDR allows travelling to Czechoslovakia. Again thousands escape to the embassy in Prague. The senior officers of the “Politburo” have to resign.

04Nov89: More than half a million people demonstrate on the Alexanderplatz in East Berlin to demand reformations.

09Nov89: THE GDR OPENS ITS BORDERS TO THE FEDERAL REPUBLIC AND EAST BERLIN.

10 & 11Nov89: Hundreds of thousands travel from East to West. Berlin is writing history. The Wall has fallen. The happiness of people, enjoying their freedom. The papers wrote: “The night, where the wall achieved lights” and “Farewell of an island”, even after Honecker claimed: “The Wall will certainly remain here for 100 years.”

13Nov89: With a result of 99.79 %, Hans Modrow becomes the new president of the council of ministers. For the first time, discussions are being held openly and figures of the economic situation are revealed. Despite the self-criticism, 200,000 people demonstrate during the Monday demonstrations (Nikolaikirche) in Leipzig and many other East German cities. They demand free elections and changes in vital matters.

19Nov89: More than 3 million people from the GDR have already visited the Federal Republic or West Berlin. In interviews with the Soviet television, Egon Krenz declared that “a reunion of Germany is not under discussion.”

03Nov89: Pressured by the party basis and the population, the Zentralkomitee and the Politburo resign. This also means the end of the 40 day term of the Honecker successor Egon Krenz.

11Dec89: A Soviet Union initiative unites the ambassadors of the allied forces in Germany to discuss the events in the GDR and the changed situation in Berlin. Minister of foreign affairs Baker (USA) declares sticking to a reunion of Germany.

22Dec89: During the night of the 22nd of December, parts of the wall at the Brandenburg Gate are being removed. To the left and the right of the gate, passages are being made. The transition is stately opened by Federal Chancellor H. Kohl and president of the council of ministers Modrow.

24Dec89: After the removal of the visa and exchange obligation, more than one million West Germans visited the GDR during Christmas. Hundreds of thousands GDR citizens also shortly visited the West.

08Jan90: The Monday demonstrations are dominated by “Germany, only native country” and “SED, never more” (communist party of the GDR: Sozialistische Einheitspartei Deutschlands).

21Feb90: The GDR Chamber of People acknowledges a united Germany.

18Mar90: The first free parliament elections. Lothar de Maizière becomes the president of the GDR. The GDR government confirms her reunion with Germany according to article 23 of the constitution.

24Apr90: Federal Chancellor Kohl and the new GDR president agree to a social, economic and monetary union starting on the 1st of July 1990.

18May90: The state agreement about the economic, social and monetary union is signed.

17Jun90: The GDR Chamber of People writes down the Treuhand law.

22Jun90: The proposal from Schewardnadse to temporary absorb the united Germany in both military organizations is disapproved.

15 & 17Jul90: During a visit by Kohl and Genscher, Gorbachev agrees that a unified Germany can decide by itself which military alliance it wants to enter. From the moment of its reunion, Germany possesses complete sovereignty, assuring their membership for the NATO.

23Aug90: The Chamber of People approves the reunion of the GDR with the FRG.

03Oct90: The constitution also counts for the GDR. The 3rd of October becomes a legal public holiday, the day of unity. The GDR is no more…

30Apr91: The last Trabant car leaves the Zwikau factory Sachsenringwerk. In 34 years more than 3.6 million Trabis have been build.

12Nov92: Erich Honecker is brought before the court of law on charges of deadly fire, mines and automatic defense systems, together with some other captains such as head of the Stasi Mielke.

12Jan93: Honecker is not being prosecuted due to health problems and flies to his family in Chile.

31Dec94: The Treuhand is abolished.

09Nov09: 20 years since the fall of the Wall: Dominoaktion in Berlin.

03Oct10: 20 years of united Germany in Bremen and Berlin

13Aug11: 50 years since the construction of the Wall